Making a Choice: Picking a Vascular Device That’s Right For You

If you’re like me, you’ve probably splurged on PICC line covers before even knowing, or at least having an idea of, what type of vascular access device you should get.

Would you even be needing those?

You should know that what’s right for you may not be the same as the next guy. Consider your condition:

Is it for home use?

Is it for long-term or short-term use?

What is the pH value of the fluids that are going to be introduced in your body?

Of course, what your doctor recommends should be taken seriously.

But just so you won’t be entirely clueless about his decision, you still should have enough information about the different types of vascular access devices. A lot of doctors also have the consideration of actually asking the patient details about his or her lifestyle, in order to make a more informed decision about which medical device will be a best fit for the person using it.

DON’T GET COMFORTABLE WITH YOUR PICC LINE SLEEVES JUST YET, BECAUSE THIS ONE IS FOR SHORT-TERM USE ONLY.

The peripheral catheter is around 7.5 cm long, and must only be used for IV treatments anticipated to last for less than seven days.

You can leave the cannula (which is just a fancy word for tube) for up to 72 hours, but the pH value of the medications given to you must just be around 7 to 9.

Basically, it’s just the same as the previous one in terms of recommended usage.

Like the short peripheral catheter, peripheral midline is usually needed for short-term IV access. But you (and your doctor) would probably prefer the latter if your body would be introduced into vesicant drugs that cause blistering.

The logic behind the midline peripheral catheter is to get the fluids where they are needed right away and to minimize blistering.

There’s a downside, though. If you’re afraid of long needles, get ready because this catheter can be as long as 20 cm depending on the length of your arms. 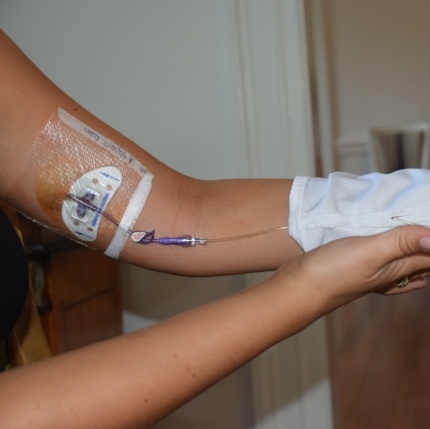 If you want something a little more discreet than a jugular vein catheter, this may be what you’re looking for.

However, if you’ve had upper arm injuries in the past, the PICC may not work for you.

If you already have PICC line covers to match all of your outfits, great! You may just be able to try one for each day. Unlike the first two options, this is recommended for IV therapies exceeding six days, but not more than a year.

This still may be what’s best for you if the doctor thinks he’d need quick and reliable central vascular access. Here, the catheter tip is on the superior vena cava, so infusing irritant fluids would have the minimal effect to your body as possible.

The tunneled central venous catheter requires surgery, and is secured by surrounding tissues after the procedure is done.

Like the PICC, the catheter tip is on the vena cava as well. It’s also a great option when you’d be needing irritable fluids and other medications with pH levels far from 7.

So, for those of you who prefer PICC but don’t qualify for it due to injuries, this is the next best thing. Also, because it technically becomes a part of your body, it’s best for long-term IV access (more than a year).

Generally used in critical situations, this gives a short-term and continuous access to your central circulation.

But it can also be used for non life-and-death situations like when peripheral catheters just won’t cut it.

Here, the tip lies in the superior vena cava too. Unlike the first four, it’s not recommended for home care unless you meet certain hygiene and care requirements.

If you want to be as covert as possible about your catheter, a central implanted port will do the job.

It’s less invasive because you’d only need a minor medical procedure, and it’s not as high maintenance as the other vascular access devices.

Best for intermittent therapies, this can be used for a long time. But it’s a tad different from the first five. For the medication to be delivered, you’d need to inject through the skin. (A lot of my friends like it because they can take showers and go swimming without worrying about not getting their medical device wet!).

Hypodermoclysis can temporarily restore or maintain your hydration levels.

You can use it for both intermittent and continuous treatments because there’s minimal intrusion.

As its name implies, it’s placed in the subcutaneous tissues (just under the skin). Also, because this is more of an emergency measure, the risk of complications is very slim.

Even now that you have information about all the vascular access devices, you shouldn’t use these in place of a doctor’s opinion.

Use this as a guide to be better informed if you ever need a medical device, but what you end up using should fit your circumstances as recommended by a medical expert.

COVID-19: 5 Tips for Navigating an Outbreak with...

How Body Image Affects Our Self-Esteem and Mental...

5 Tips for Nurses to Better Connect with...

Your First Feeding Tube: what to expect

Bias in Medicine: 5 Tips to Self-Advocate