Spoonie Stories: It never rains forever and the sun always comes out

Mikayla is no stranger to chronic illness. She gives us a little window into her world, opening up about everything from the hardest part of treatment, to frustration with doctors, to her personal super hero.

SHE’S BEEN THROUGH MORE HELL THEN YOU’LL EVER KNOW. BUT, THAT’S WHAT GIVES HER EDGE… YOU CAN’T TOUCH A WOMAN WHO CAN WEAR PAIN LIKE THE GRANDEST OF DIAMONDS AROUND HER NECK.

I found out I had Chronic Lyme Disease 3 years ago in May 2013. I also discovered I had bad Candida, Epstein Barr, and multiple co-infections from Lyme – Babesia, Bartonella, Brucella to name a few. To top it off, I was just diagnosed with POTS and PVCs as well. So let’s just say I am no stranger to being sick.

My childhood neurologist diagnosed me with Lyme after seeing her for over 6 years – I was being treated for anxiety/depression and migraines. After finding out the real culprit of my problems, my primary care doctor gave me the typical doxycycline protocol but, of course, it didn’t work (I took doxycycline for 4 months and everything just kept getting worse). Finally come August 2013 my PCP referred me to Susan Neuber, a Lyme Disease Specialist. She is truly an angel on earth. I feel so blessed to have developed so much more than a dr/patient relationship with her; she has become like an aunt to me.

Collectively I must have seen at least 20 different doctors at this point. The majority of those have told me I needed a “psychiatric evaluation” … “you’re crazy”… “this is all in your head”… “you’re clearly just too in tuned with your body, you’re a hypochondriac”… “you just need some Ativan.” When you’re positive it is NOT all in your head, you can imagine how frustrating this can be. One of the most frustrating experiences I had was with a doctor that was thought of to be one of the“best” and “head of the CDC.” After the doctor had lectured me for an hour telling me how crazy I was and that “chronic lyme was not a real thing,” I was so fed up I threw my shirt off and was like:

“OH YEAH?! And where are these scratch marks from?! Are you seriously telling me this is made up?! He proceeded to look at my mom and in an almost disgusted way said,

“You’re daughter is in need of a psychiatric evaluation.. she is scratching herself.” I knew for a fact, as well as he, these scratch like marks were from Bartonella yet in ignorance he proceeded to call me crazy. I didn’t know if I wanted to cry or laugh so, of course, I did the best ugly cry you’ve ever seen and mom and I walked straight out of his office never looking back.

It’s not just getting worked up at the doctor’s office, there is such a storm of emotions that come along with treatment and this illness. Not 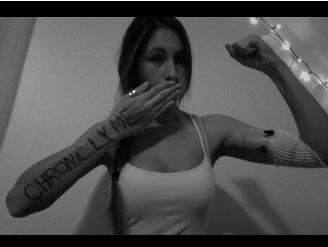 only do you have horrific physical pain that many days leave you bedridden, but you have the earth shattering emotional/mental pain. You feel worthless, depressed, not good enough, pathetic, you get intense rage outbursts, and days of uncontrollable sobbing (like crying so hard as if you’re mourning a death… the death of yourself.) But after the mourning (which may I say we are 100 and a billion % allowed – something everyone needs to remember!!!) you realize you are even better than you were before. I believe everything happens for a reason as messed up as that may seem to some. I believe there is some reason I was given this chronic illness, and because of it I have grown tremendously. You learn to more than appreciate and love the little things in life. You learn to slow down. Yes there are too many days when my life is just learning to survive rather than live but those moments I feel well enough to live… I can’t even begin to piece together how thankful I am for those moments. Just the other night I was eating watermelon in bed (and I am way protective over my watermelon YUM) and my mom was of course in bed with me and she wanted a piece so bad.. she ended up guilting me into giving her a piece… but because she was laying down/SO excited to actually get a piece of watermelon she choked on it in the funniest way–we could not stop laughing (Yah, I guess you had to be there)… It’s those stupidly silly moments that keep me going, that I appreciate the most. 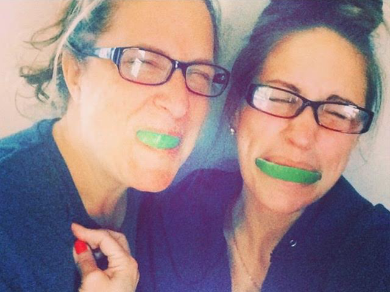 So besides making me laugh when she chokes on watermelon, my mother is without a doubt my biggest support system.. I really don’t think I could begin to explain it/show how thankful I am for how much she supports me. As a baby you are fully dependent on your mother. They spend a huge part of their lives raising you and helping you grow (let alone 9 months in their tummies!). But after a certain age children typically veer off and go on with their lives, letting their parents have their time.

For me, I am at the age where I should be veering off, but I am pretty much fully dependent on my mom all over again. Of course she tells me all the time how she wouldn’t change it for the world but I still can’t help but feel so awful at times for everything I put her through because of being so sick. I tell her everyday how thankful I am for her and how I know I wouldn’t be here without her constantly giving me the strength to continue fighting on. She is my strength and I wish there was something more I could do to show her how thankful I am.

Not only does she care for me, but she works two jobs as a special education teacher and also at a group home on weeknights. You know how they make comic books/movies/shows about all the superheroes? Well, let me let you in on a secret… superwoman… yeah that’s actually not the real one.. she’s actually my mom ;). At times there are doctor appointments that must be scheduled when she is at work (yes she has gone beyond her sick days/vacation time at work because of me… she is still having to take time out and not getting paid now… my fault.. damn lyme disease)… during the days she absolutely can’t take out (mostly because of meetings) I am SO thankful for her siblings (she has 4.. 2 sisters 2 brothers) and of course my GRANDMA for being able to take me to my appointments.

IT NEVER RAINS FOREVER AND THE SUN ALWAYS COMES OUT.

What Should You Do When You Get a Tick Bite?

Mikayla’s Story – A True Friend in the...

Creating Meaning and Purpose While Living With Chronic...

Eating From the Garden: How Sickness Led to...

Hi how are you? I read your story sounds like mine to the tee. I was wondering how you are doing now and the treatment you received. I live in Rhode island. Im asking because ive got this chronic lyme crap too. My email is Fitzs36@gmail.com

Hello! Sorry for the delay. If you are still looking for community, or to chat about our similar experiences, you can always join the Friends in the Fight facebook group (linked here)! It’s private, so we can share experiences without it being so public. I hope you are doing well!