I often joke and say, “I’ve been through more than an elderly person.”  But sometimes, it’s not a joke at all.  It’s how I feel–especially since my doctors say that my body is that of an old woman’s.  My story starts when I was 11 months old.  I was diagnosed as a severe asthmatic and progressively got worse.  Worse to the point that I could no longer walk up a flight of stairs without my mom carrying me.  Little did we know, it was not asthma, but a failing heart.  I was born with a rare heart disease called restrictive cardiomyopathy.

I was in heart failure at the age of 10 and needed a new heart in order to live.  I was unable to go home, so I spent Christmas, Hanukkah, New Years, and Valentine’s Day in the hospital waiting for my new heart.

I was doing well with my new heart, except 9 years later (2 years ago) I was diagnosed with almost stage 3 post-transplant, Hodgkin-like lymphoma. I had to do 8 months of chemotherapy via a PICC line in my arm.  Not only did the PICC line deliver chemo, but it delivered my blood and platelets for my many blood transfusions.

It became by buddy because I lost my BEST bud, my hair.  I lost my long beautiful hair along with 25 pounds.  I was 19 years old, bald, and 75 pounds.  I felt disgusting.  What seems so minuscule, was so important to me.
I looked sick. 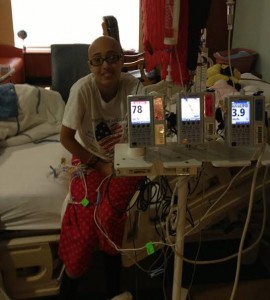 IT WAS DIFFERENT WHEN I HAD MY HEART TRANSPLANT BECAUSE I NEVER LOOKED VISIBLY SICK, BUT WITH CANCER IT TOOK EVERY OUNCE OF CONFIDENCE I HAD.

I remember I would stare at myself in the mirror and begin to cry.  I felt so ugly and I was so dependent on everyone around me.  What is so simple to people, such as walking to the bathroom or taking a shower, was impossible for me.  I needed someone to physically walk with me and bathe me because I had lost my ability to do so.

CANCER CAN TAKE A LOT OF THINGS, BUT IT COULD NEVER STRIP ME OF MY HAPPINESS AND HOPE; NOTHING COULD STOP ME.

I am one year in remission, and still have my healthy transplanted heart with some hair back. 🙂

MY JOURNEY WAS A LONG AND ROUGH ONE TO SAY THE LEAST, BUT I AM BACK–EVEN IF MY BODY IS DAMAGED IN OTHER WAYS DUE TO EVERYTHING!

Join us in our Friends in the Fight Group to share your stories and connect with our community.

A Stronger More Confident Me

Keeping Friends from the Depths of Your Fight:...

Meet Friend in the Fight, Calyx Duff: A...

How The Spoonie Community Taught Me to Love...

Keeping Friends from the Depths of your Fight:...