Love and Patience: Mother and Daughter Fight Against Lukemia

A mother can do a lot for her daughter. Love her, support her, teach her everything from how to tie her shoes, to doing her hair, to respecting herself and others. It is hard work to raise a daughter, and when life throws you obstacles, it can become even more challenging…

Jackie has a beautiful daughter named Carmen. Carmen was diagnosed with cancer a week after her third birthday. It has been a hard road for Jackie to watch her young daughter go through treatment. It has caused challenges, yet the two have supported one another, and taught each other more than Jackie thought possible.

WHEN JACKIE FIRST FOUND OUT THAT CARMEN HAD LEUKEMIA, LIKE MOST PEOPLE, SHE WAS IN A STATE OF DISBELIEF.

She had spent the night seeing six different doctors, all with a sick daughter who was both not feeling well and was dealing with new people poking and prodding her.

As the doctors gave Jackie the news, and all she thought was, “How is this possible?  Nobody in my family has cancer.”  She was shocked, and she was scared. She had just gotten some of the hardest news that a parent will ever have to hear.

Jackie knew that she was going to have to explain to Carmen that she had cancer. However, Jackie was having a hard time wrapping her head around how to do this.

HOW DO YOU EXPLAIN TO A THREE-YEAR-OLD THAT SHE HAS CANCER?

At the hospital, they wanted Jackie to tell Carmen right away that she had cancer. The nurses gave her Barbie dolls with shaved heads, telling Jackie that it will help Carmen understand that she had cancer. The last thing that Jackie wanted to do was to confuse her daughter; her only concern was to make sure her daugher understood the best she could; but even with the nurses’ guidance, to Jackie there was no way to explain cancer to a three-year-old without confusion. Jackie described her feelings at the time, “She doesn’t know that she has cancer, but she does know that she is sick.”

USING THE LANGUAGE OF “BEING SICK”, HELPS CARMEN UNDERSTAND WHY SHE HAS TO STAY HOME FROM SCHOOL, WHY SHE CANNOT PLAY WITH HER FRIENDS, AND WHY SHE HAS A PICC LINE.

And Carmen loves to show off her PICC line. Jackie has taught Carmen not to hide the fact that she is sick. When people see them running errands, some will come up and talk to Jackie and Carmen. They may ask if Carmen has cancer or share their story of a cancer experience, and while Jackie is answering questions, Carmen is  right there showing off her PICC line. Carmen uses the PICCPerfect that Jackie found on Instagram. 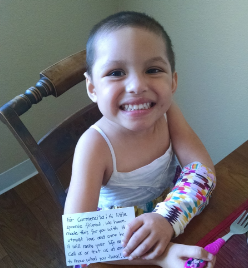 WHEN IT CAME IN THE MAIL AND JACKIE BROUGHT IT OUT TO CARMEN HER FIRST RESPONSE WAS: “IT’S COLORFUL AND I LIKE COLORS.”

Even though her daughter has cancer, Jackie knows that at the end of the day Carmen is just another kid who wants to have fun on the playground, and even though she may look sick, that is nothing to be ashamed of. Feeling sick may stop Carmen on a given day, but all the other days nothing can stop Carmen. Jackie expresses that  she knows that Carmen is not having a normal childhood. This is one of the hardest things for Jackie to deal with as a mother. However when all is said and done, Jackie says that Carmen handles the diagnosis better than she does

CARMEN, AT ONLY THE AGE OF THREE, HAS MASTERED THE ART OF PATIENCE.

Jackie says that Carmen is “beyond her years”; that she “is more advanced in waiting.” Carmen is very patient and understands that she will have to wait to do things.  Jackie recently explained to Carmen that she will have her PICC line taken out and a port put in.  “They are going to take the needle out of your arm and put it in your chest under your skin – and when they do that, then you are going to be able to do more stuff.” Instead of reacting to the needles or going to doctors, Carmen was just excited that she would get to swim in her Pop-Pop’s pool.

More often than not, when Jackie tells Carmen about something to do with being sick, Carmen will simply react with an “Okay, Mom.” She does not fight or worry.  Carmen just listens and trusts her mother.

JACKIE HAS GIVEN HER DAUGHTER HONESTY, AND IN RETURN CARMEN HAS SHOWN HER MOTHER ACCEPTANCE.

THEY ARE A POWERHOUSE PAIR WITH A LOT OF LOVE.

Leave Carmen or Jackie a message of encouragement and spoonie support in the comments below! 🙂

What Should You Do When You Get a Tick Bite?

The Journey of a Young Man With Selective Mutism

Your Mind Is a Powerful Tool: 6 Lessons...

Is it COVID or is it Lyme?

The Journey of a Young Man With Selective...

A Fighter’s Journey: Living With a Rare Illness

4 Things to Do When Your Loved One...

10 Things To Know When Someone In Your...

Gratitude for Those Who Lift Us Up