The Art of Storytelling in Chronic Illness

Dana was diagnosed with myelodysplastic syndrome at the age of 18. She was a young, artistic, field hockey player that was just hit with a hard diagnosis. She attended a talk with a cancer survivor when her family member connected her with Dr. Angela Cooke-Jackson. Dr. A thought it would be helpful and fulfilling if Dana shared the story of her treatment. Dr. A worked at Emerson College and knew she could find a good student that could help Dana produce her story. And that is how Dana met Taylor.  Taylor was studying Communication Sciences and Disorders with a minor in Health Communication at Emerson College. Dr. A approached Taylor with the idea, and Taylor accepted. Taylor had a passion for storytelling and she was ready to begin a strong partnership with Dana.

After their first meeting at the Panera in Downtown Boston, it was established that Taylor was going to document Dana’s journey through her treatment with video. Taylor would be with Dana as much as her college-student schedule could allow it, having her camera ready to soak up the story. One of the first times Taylor was filming was when Dana cut her hair. Taylor did not lie, she said that it felt a little awkward at first to be this unknown woman behind the camera. However, Taylor expressed that she knew she was the one that had the tools to tell this amazing story, and that meant a lot to Dana and her family. Early on in their storytelling, it was clear that this was not just forming a partnership, but a strong friendship.

Dana was admitted December 1st, 2015, and remained there until January 1st. It was a surprisingly short time for treatment, but Dana said that time was full of heaviness, nausea, mucositis, weight loss, no privacy, constant mandatory nurses checks, and not a lot of sleep. But through all of this, Taylor was there. She would find any time she could to spend with Dana. She would be there to document, but she would also be there just to hang out. Dana said it was a very positive thing to have so many close friends and family with her at the hospital; it kept her very positive. All in all, it was an awesome New Year’s gift to be sent home.

The next stage, as so many patients know, is recovery. And the recovery is a whole new battle. Chemo and bone marrow transplants are a 9-12 months process. There is a big factor of isolation here. Dana could only come out for clinic visits and had to stay in a controlled environment to protect her suppressed immune system. All throughout her recovery, Dana was limited in everything. Food, activities, people–being around people is a big risk. So much of her time was spent inside, and Dana said it was an overwhelming amount of time. However, with all of this isolation, she could paint. The painting was something that she was free to do, and it gave her energy. Later on, she even got the strength to work out. She was recovering very quickly, which was no shock to Taylor because she knew Dana had that strength. She was going to be a field hockey player for Assumption College. Dana has a strong drive. 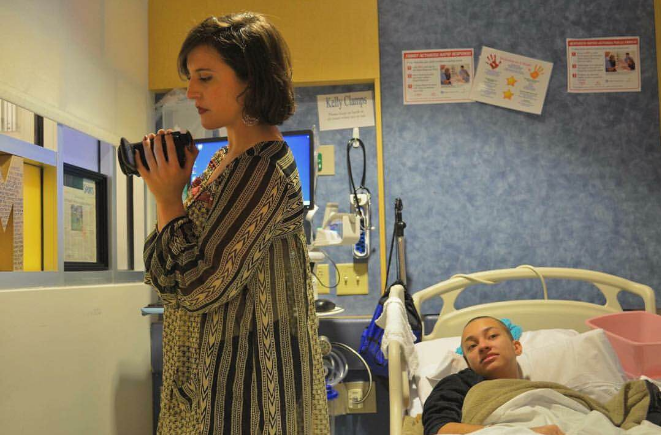 So while Dana was pushing her body to recover, she was also pushing her mind to grow. As said before, she found painting and this was opening up a new door to new opportunities. She learned that she wanted to start selling her painting, not only to represent beauty but to tell stories. The paintings were getting such a positive uproar, giving Dana confidence not only in her work but giving her confidence in her purpose.

The painting below shows one of Dana masterpieces. Dana explained that the paintings show 4 seasons, and the timeline of her treatment goes along with the seasons. Half of the painting was before, and the other half was after. Fall was the diagnosis. The fall prepares for winter, and in this case, winter was treatment. The winter can be the hardest and most challenging time for people, much like treatment. Spring represented the physical, emotional, and spiritual growth. The time of recovery where it is a time of renewal and rebirth. Finally, there is summer, and this is Dana’s hope for beauty, warmth, and positivity.

One of Dana’s favorite quotes is “bloom where you are planted” – flowers don’t have a say in where they are planted, but no matter what they can still bloom. Dana is limited by her roots, but it did not stop her from growing. She loves her friends, family, and her faith. She also found comfort in the fact that she could be a voice for others. Dana said, “You shouldn’t let your circumstances overcome you, there is always a possibility that you can come through it. Stay positive and stay in faith. I need to hold that near and dear to my heart. I did not let my circumstances overcome me”.

These two storytellers were able to give so much to one another and so much to whoever heard their story. Dana believes that when you share your story and your testimony, you never know how it is going to affect other people. You can touch people that you have never even met; you may not know what you can do to help someone. When Taylor reflected on her own story and privilege, she could find identity in her own choices, but Dana did not have the choice. Dana was given a diagnosis, something that she did not choose, but she was still able to find herself. Taylor says that finding yourself is not always a straight path. We tell stories as a baseline, and we let people have their own narrative. Taylor believes that storytelling opens up a dialogue that we wouldn’t normally talk about. She says that, “No matter where I am – I am going to be telling stories and sharing experiences.”

Dana is so humbled and blessed that she has inspired people. She does not know where life will take her, but she knows there are plenty of doors open now. After this experience, the biggest “positive” thing she has gotten out is her new testimony. Taylor helped Dana tell her story, and Dana has given Taylor a story to tell. Two amazing women were brought together just to tell one story. This one story created a friendship, created growth, and created purpose. It is what every good story should do.

“We will not stop telling and sharing stories.”

Be Your Own AdvocateCancerPainting
0
FacebookTwitterPinterestEmail

My Story About Lyme Disease

The Biggest Lessons Bipolar Disorder Has Taught Me

Our Point of View: Understanding Women’s Experiences of...

Love and Patience: Mother and Daughter Fight Against...

3 Tips for Coping With Cognitive Dysfunction

Self Care Case: What do you carry?

A Different Form of Normal

Surviving Allergies in the Time of Covid-19